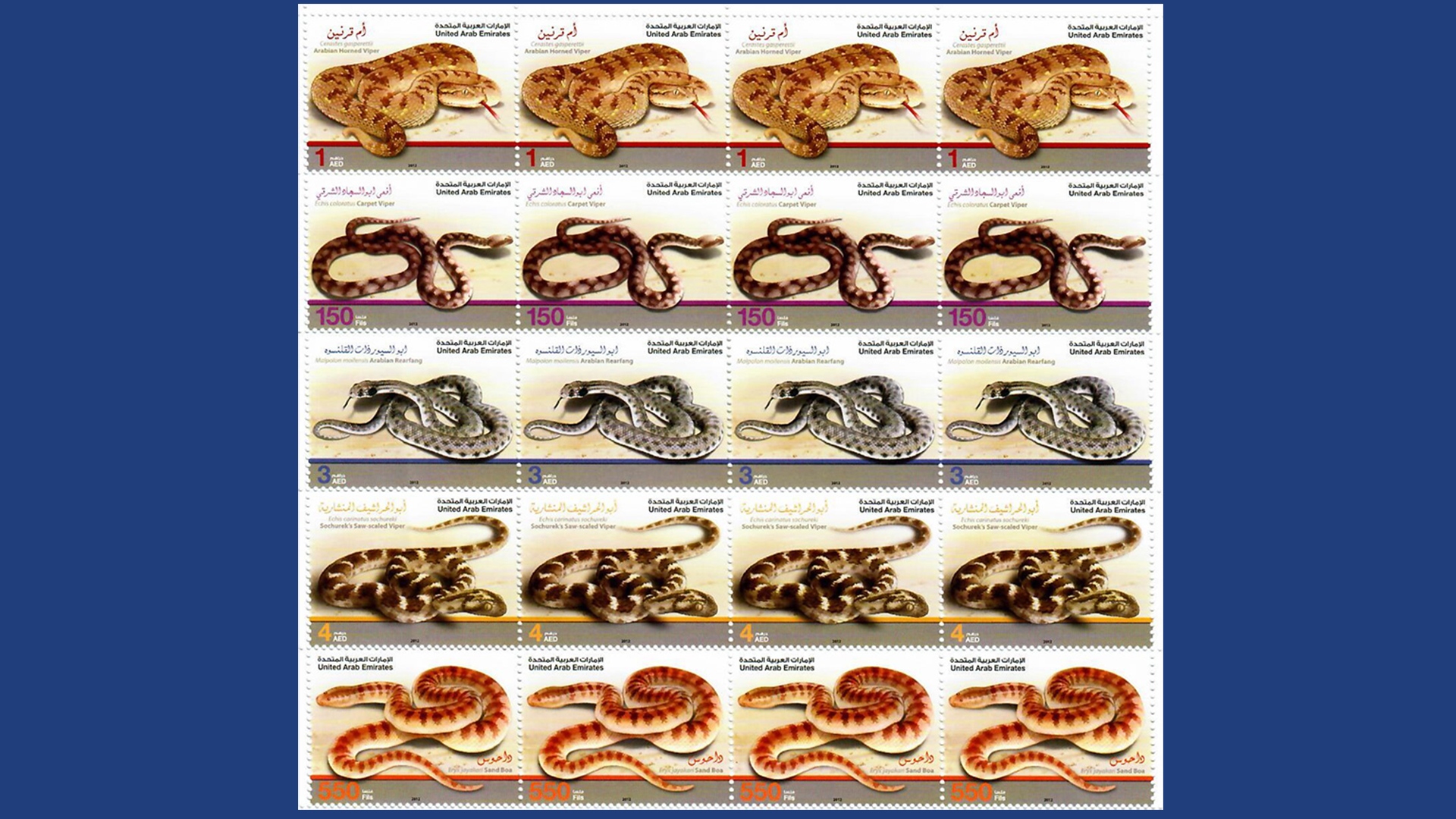 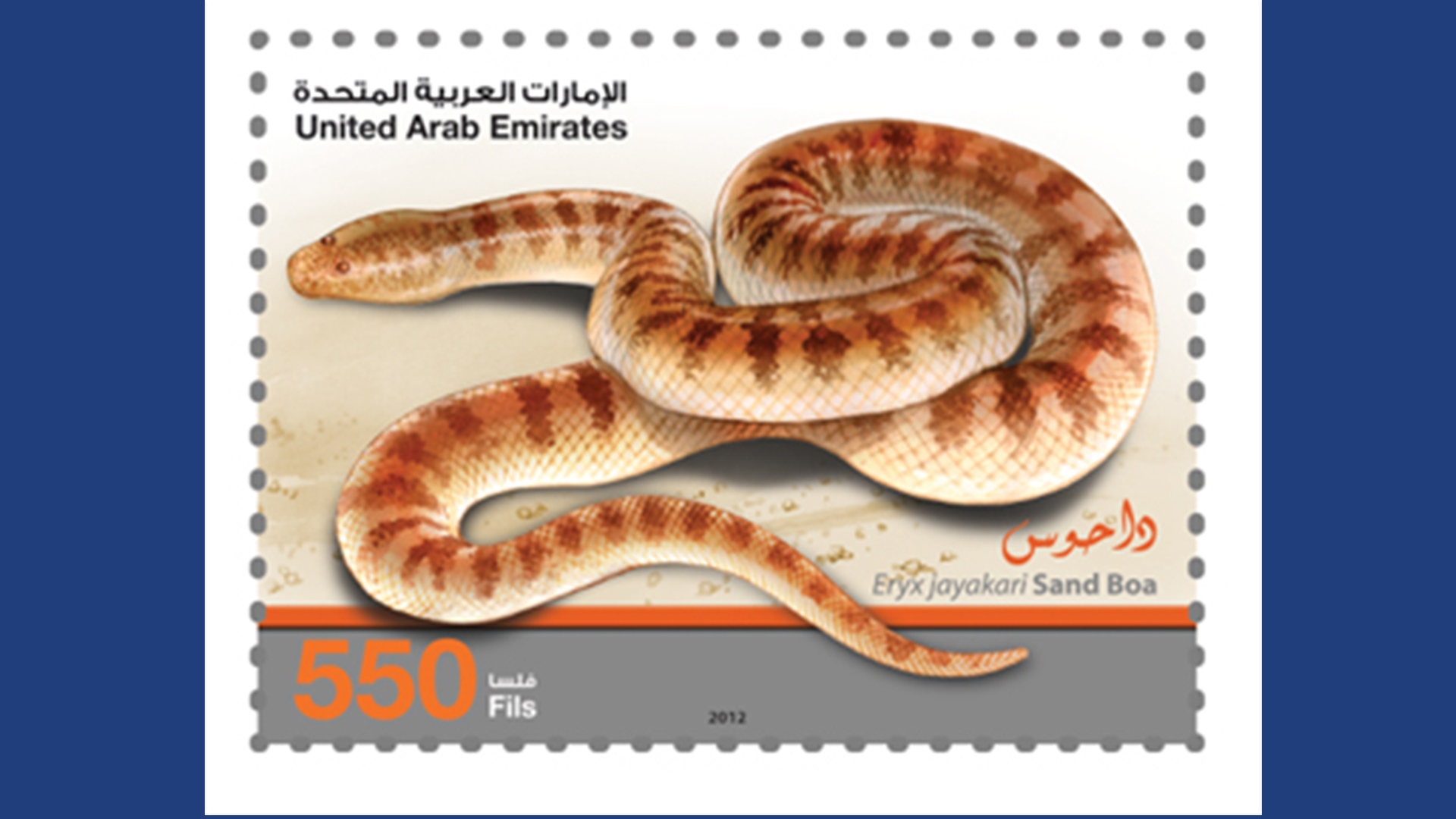 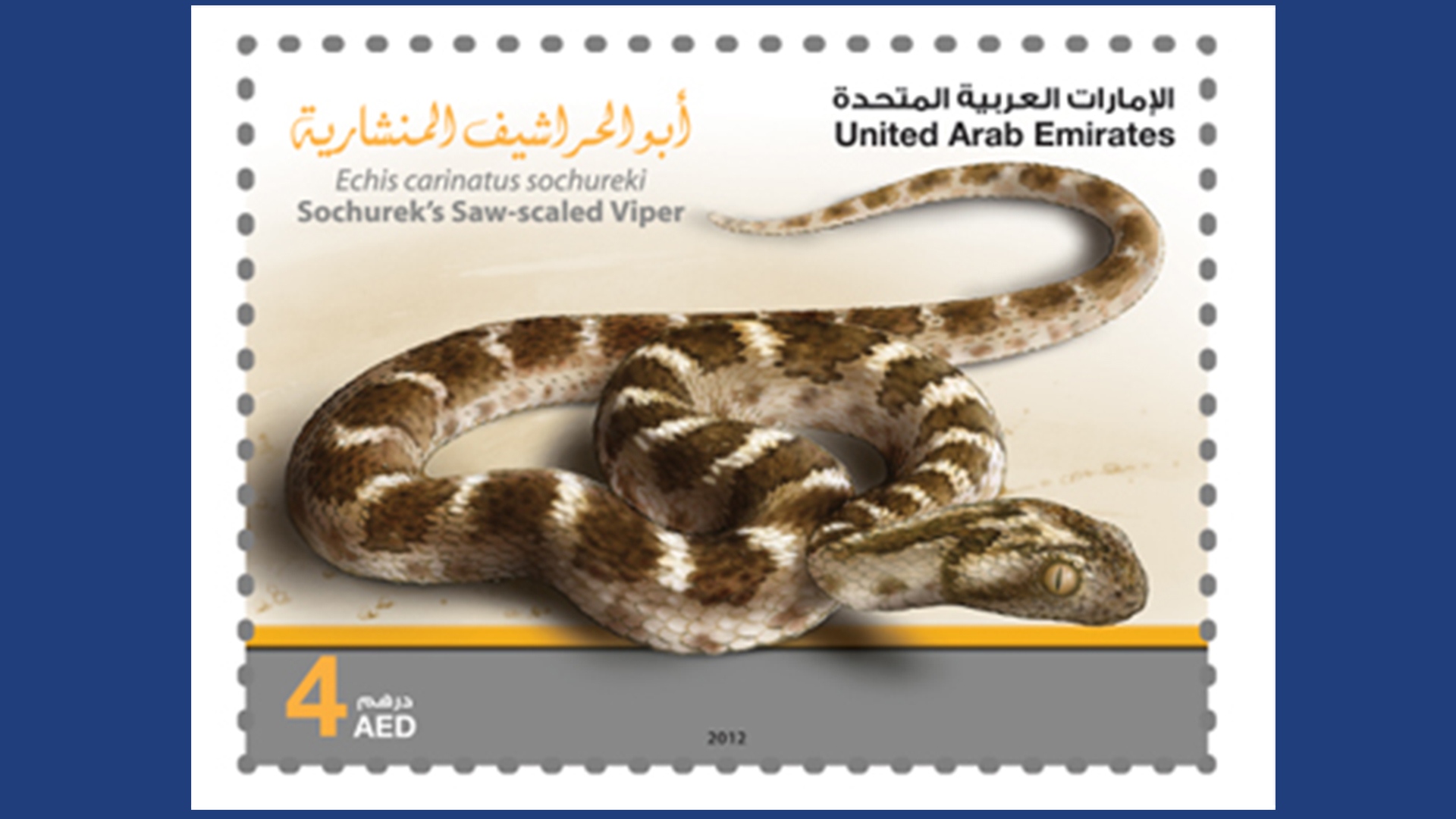 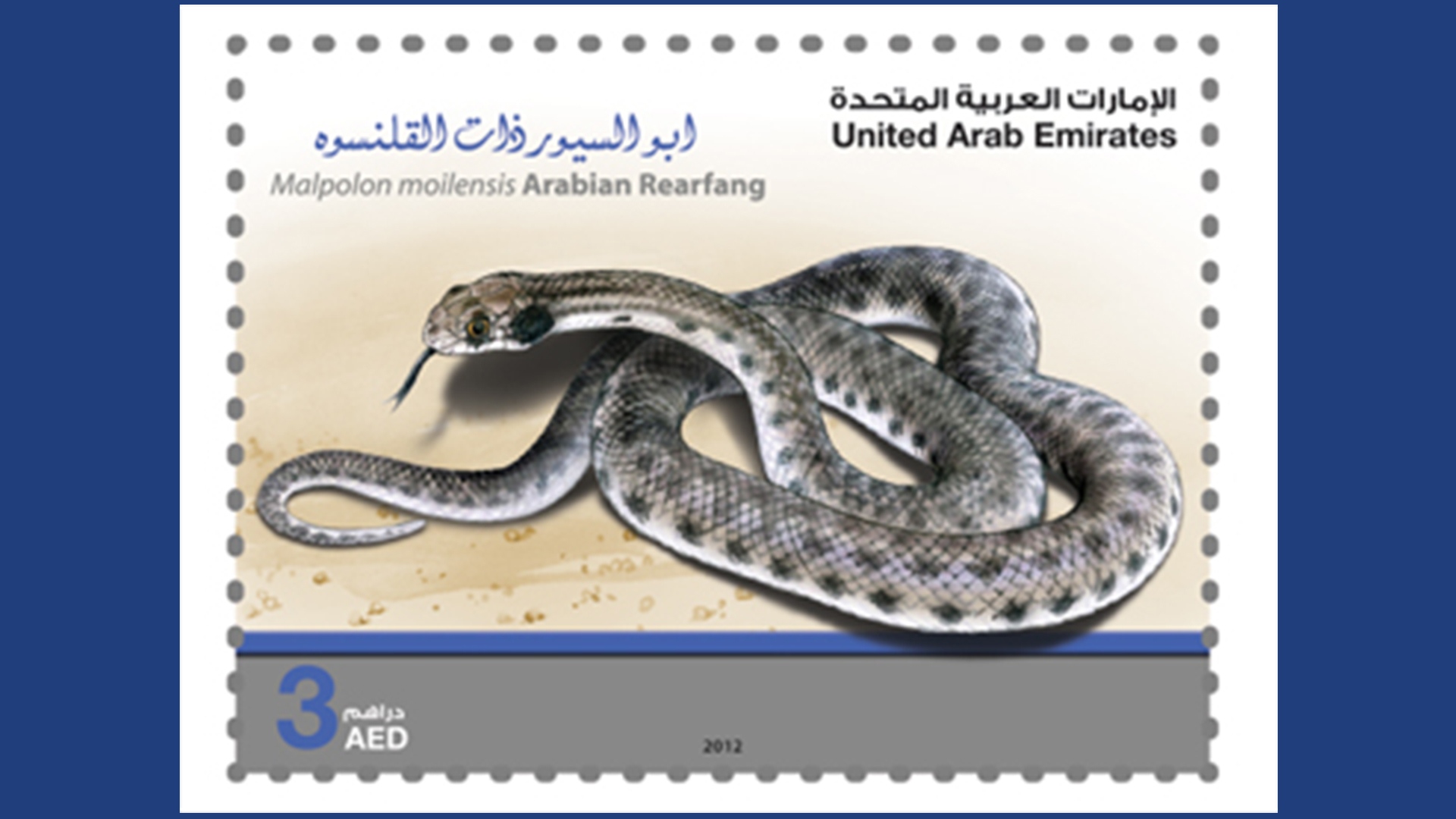 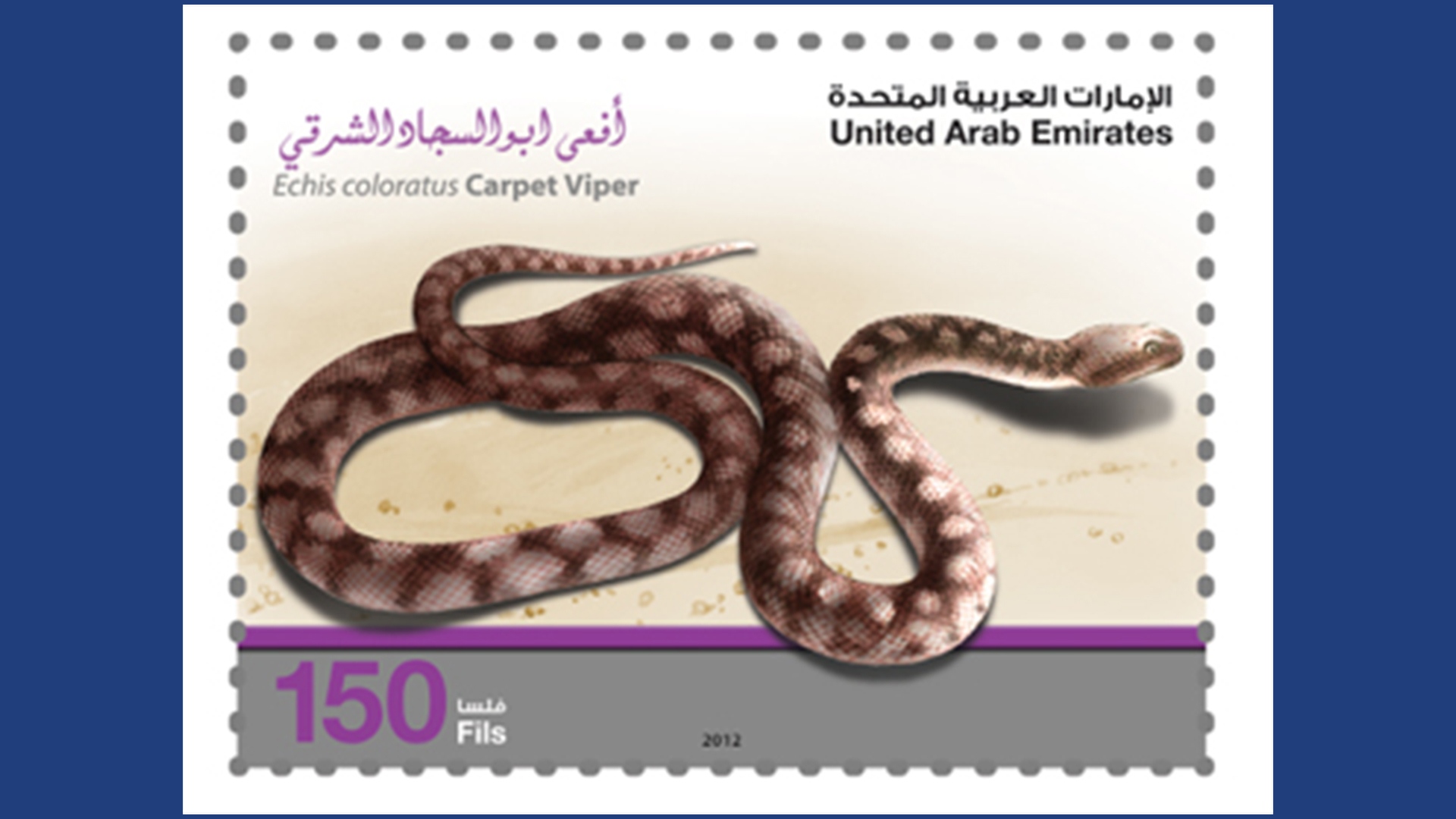 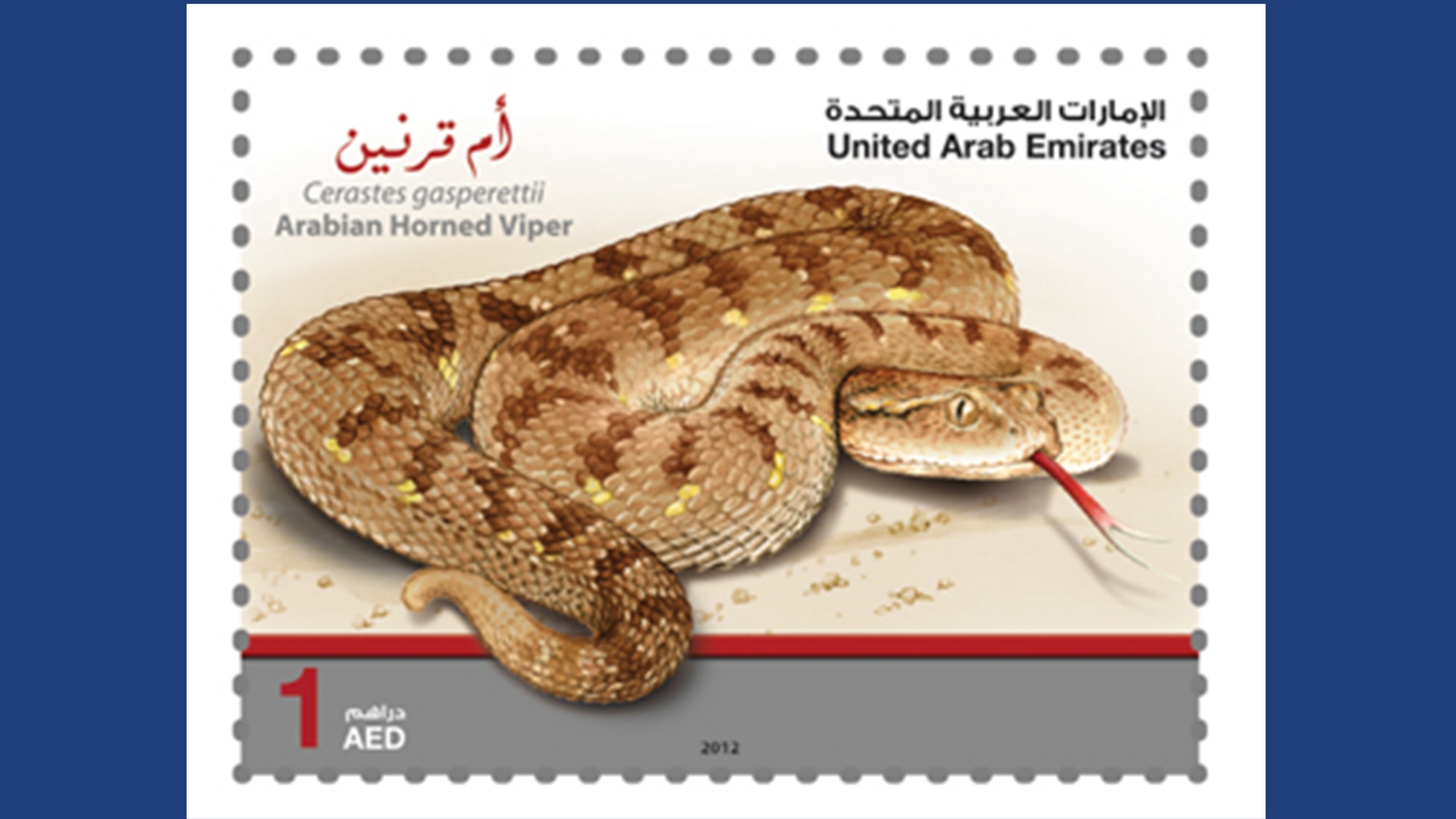 Desert Snakes in the UAE

The United Arab Emirates’ varied habitat supports a good variety of reptiles dominated by lizards on one hand and snakes on the other.
Arabian Horned Viper
The UAE’s venomous land snakes are represented only by 3 species of vipers and 1 species of false vipers. It is devoid of cobra family members. The largest and the heaviest among the vipers is the Sand Viper, also called Horned Viper, although most specimens do not possess horns. By and large, all vipers have a narrow neck, a large head to accommodate two pairs of fangs and venom glands and a heavy body that separate them from all other land snakes of the UAE. Rather featureless sandy brown in basic color, while some specimens may show few markings. It feeds largely on rodents and some birds. It Kills prey by injecting venom. Unlike most vipers this one is an egg layer about 60 cm in length deadly for human beings.
Carpet Viper
This is the longest venomous land snake of the UAE, measuring nearly 80 to 90 cm and has much more pronounced head and the narrowest neck as well as most colorful body. Also, this species is restricted to the hills and foothills only. This is the only one that can be found close to water bodies in wadi’s. In addition to other vertebrates, Carpet Viper also eats toads that live in or near wadi’s. It produces live babies & it is deadly venomous too.
Arabian Rearfang
One of the largest semi-desert loving snakes of the UAE found in sparsely vegetated areas to foothill countries. In Zygophyllum and Cornulaca plants dominated desert it is active at daytime, feeding on small rodents, lizards, bird chicks and even small snakes. It reproduces by laying eggs. If cornered or disturbed, it can raise its head and front part of the body at the same time flattening the neck region and tilting it towards the intruder, giving it an appearance to some extent similar to a ‘cobra’; hence the nickname false cobra. It is mildly venomous and considered not dangerous for people , measures about 140 cm.
Sochurek’s Saw-scaled Viper
It is possibly the commonest venomous land snake of the UAE, preferring semi-desert to coastal areas and hilly as well as farming areas. This viper is very colorful, heavy bodied and shortish. Its feeding habit is similar to Sand Viper. Additionally it eats house mice as it lives close to human habitations. This viper produces live babies, instead of laying eggs. It is the deadliest of venomous snakes in the country and most human fatalities or envenomation result from this species.
Sand Boa
Of the terrestrial snakes, the most abundant one is possibly the Sand Boa. It is absolutely a harmless, non-venomous, burrowing, nocturnal snake, partial to sandy habitats, feeding largely on other reptiles, especially lizards and small rodents. Like all other boas, it kills its prey by constricting and but lays eggs instead of producing live babies about 60cm in length.

As part of its support to efforts to preserve the natural environment of UAE, in coordination with Dubai Municipality-Public Parks & Horticulture Department, Zoo Management, Emirates Post has issued a set of special stamps in 5 denominations and a distinctive Souvenir sheet.

Sold as: 4 stamps for each denomination, a total of 20 stamps in 1 sheet