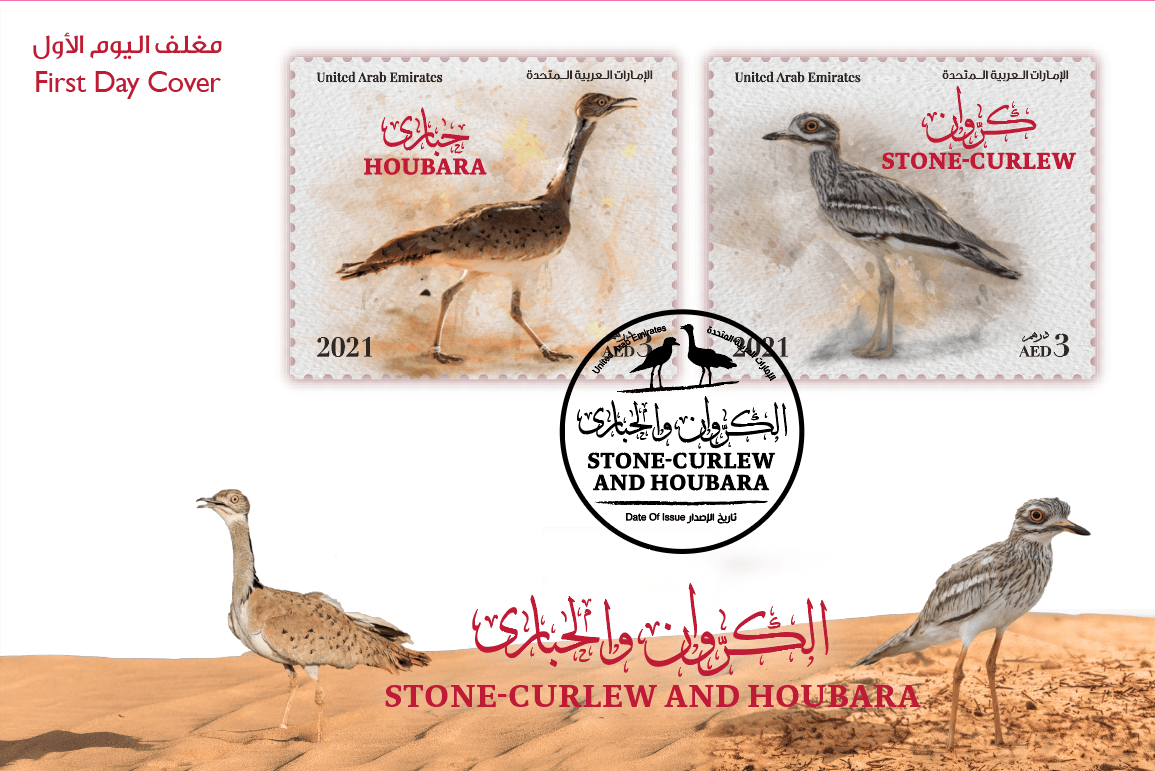 Emirates Post in collaboration with the Hamdan Bin Mohammed Heritage Center (HHC), has issued a set of commemorative stamps bearing the images of Curlews and Houbara Bustards. The joint initiative is aimed at preserving UAE’s national identity.
Success Story: Sheikh Zayed’s Care
The success story began in 1977, from Al Ain Zoo, with only 7 Asian houbara bustards, that marked the beginning of many captive-breeding programmes in the UAE. With strong will and massive efforts for many years, the breeding projects saw the production of the first captive-bred Asian houbara bustard chick in 1982.
The seed was implanted in the year 1977 by the Late Sheikh Zayed Bin Sultan Al Nahyan, the UAE’s founding father, who took great care of this initiative. Accordingly, the houbara bustards grew in abundance over four decades following the implementation of solid strategies, to reach more than 53, 743 houbara bustards recorded in year 2016.

Houbara Bustards
The UAE is leading the world in the preservation of houbara bustards and sustaining their numbers in the wild as this particular bird enjoys a special status in the Emirati heritage and customs. Houbara bustards are primarily migratory birds that prefer to settle in hills and naturally flat habitats. In the past, the houbara bustards were considered prey to the Arabian Peninsula’s popular practice of hunting with falcons. The trained falcons used to hunt and bring this bird back to owners for their daily sustenance.

Curlews
Curlews are migratory birds found in most parts of the world, including Europe, Asia, Africa, the Americas, and the Arab countries. There are different species of curlews and desert curlews or stone-curlews are the most commonly known in the UAE. This bird is known for its loud wailing sound that can be heard at a great distance. Poets and literary Arabic writers use the curlew’s characteristics in their works, enriching it with similes and metaphors, especially its sound, harmony of its colours and graceful movement. Curlews usually find habitat in semi-desert, rocky and agricultural areas. One key characteristic of long-billed curlews is that they can swim and fly skillfully. Curlews are active at night, and during the day, they remain sheltered in fear of predators.