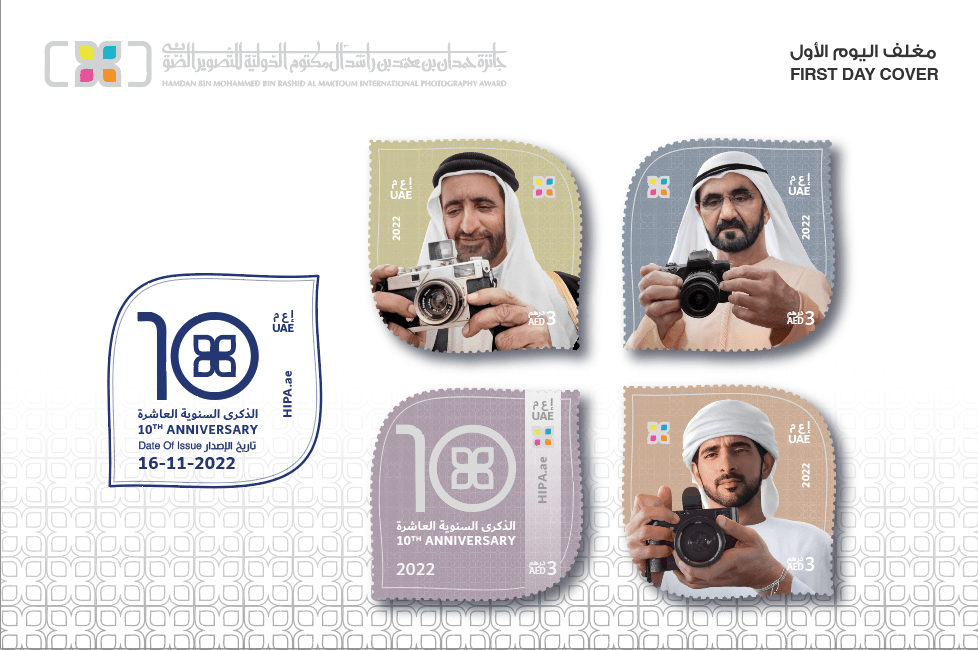 The Ten-Year Anniversary of the establishment of the Hamdan bin Mohammed bin Rashid Al Maktoum International Photography Award (HIPA) commemorative stamp has been issued under the patronage of His Highness the Crown Prince of Dubai and Chairman of the Executive Council, who not only curated the Award’s vision but also laid the foundations for it to flourish in the world of photography for many years to come. HIPA has grown to become a mainstay photographic institution that promotes all forms of photography, while also supporting talented artists and their passion for the art form. The organisation raises awareness of photography’s important role in encouraging inter-civilizational dialogue and promoting the principles of tolerance, beauty, and humanity from the emirate of Dubai to the people of the world.

The commemorative stamp is adorned with three unique photographs that symbolize three generations of Dubai’s leadership, who also happen to be pillars of the United Arab Emirates history and future.

The first photograph is of the late Sheikh Rashid bin Saeed Al Maktoum, one of the Founders of the Union and the former Vice-President and Prime Minister of the United Arab Emirates. He is credited with being the architect of modern Dubai, overseeing its development into a modern and cosmopolitan city.

The second photograph is of His Highness Sheikh Mohammed bin Rashid Al Maktoum, Vice-President and Prime Minister of the United Arab Emirates and Ruler of Dubai. Renowned for his passion of horses, poetry and tolerance, Sheikh Mohammed embodied the vision of his father, the late Sheikh Rashid, by transforming Dubai into a global hub that many seek to visit and reside in.

The third photograph is of His Highness Sheikh Hamdan bin Mohammed bin Rashid Al Maktoum, the Crown Prince of Dubai, Chairman of the Executive Council and the founder and patron of HIPA. Sheikh Hamdan is the driving force behind Dubai’s future vision and continued global standing. A talented photographer in his own right, his photographs are followed and admired by millions of people around the world.

Since its foundation, HIPA has grown to become one of the best-known arts and photography brands in the world. Over half a million photographers from 205 countries around the world have taken part in the competition, with a number of high-profile winners being recognised for their service to the artform. Over the last ten years, the total prize pool awarded by HIPA has exceeded 16 million Emirati Dirhams.

HIPA has also organised over 90 free photography courses and training programmes that are open to the public. As a result, over 4,000 amateur and professional photographers have benefited from these courses. HIPA has organised and participated in over 50 photographic exhibitions in several countries around the world from Brazil in the west to China in the east.

In addition, HIPA also organized the Dubai Photo Exhibition, a museum-quality, international photography event which featured over 700 photographs from around the world, transcending boundaries between form, technique, and geographic region.

HIPA is a member of the prestigious International Photographic Council (IPC), a non-governmental organization (NGO) of the United Nations, becoming the first IPC member organization from the Middle East region.

Over the years HIPA has delivered five humanitarian programmes in Jordan, Yemen, Pakistan, Greece, Malaysia, and Indonesia. The most notable of these programmes was the “Lakum” initiative which provided educational materials and fun gifts to over 12,000 children in need throughout the world.

The Award has also published over 500 educational articles on photography through ’Photographia’, a weekly piece published in print and digitally in ‘Al-Bayan’ newspaper.